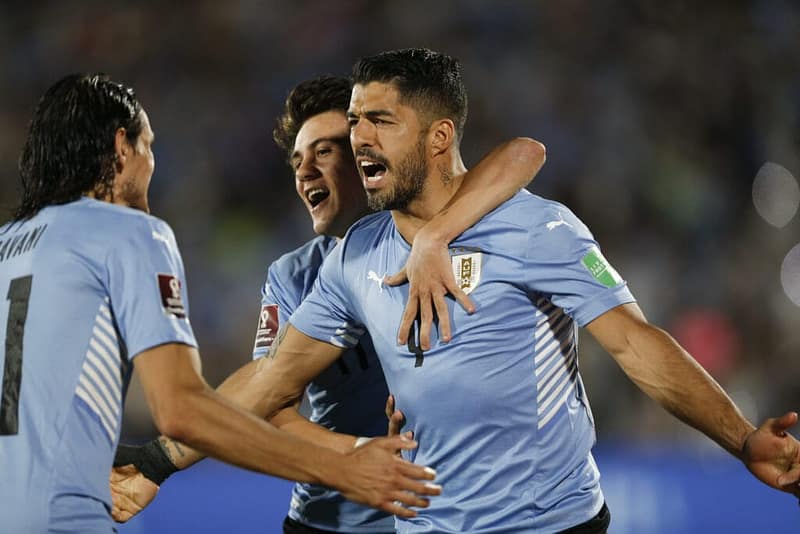 Uruguay National Football Team is one of the most successful teams in history. They were the first FIFA World Cup Champion in History and the first country to organize the world cup. Uruguay was also the champion in the 1950’s FIFA World Cup with the famous “Maracanazo”. In the modern era, Uruguay national football team has returned to being a very respected opponent in any contest with a very powerful roster of players that include some of the best players in the world of the past 15 years, with stars such as Diego Forlán, Luis Suárez, Diego Godín, Federico Valverde, Edinson Cavani among others.

The history of the Uruguay National Football Team

Uruguay’s National Football Team has a rich and exciting history. The team was founded in 1890, making it one of the oldest football teams in the world, and also one of the most acclaimed.

Uruguay has a long and successful competitive history, winning 2 Olympic Gold Medals (1924 and 1928), 2 FIFA World Cups (1930 and 1950), and also 15 Copa America tournaments since it was established. In addition to their on-field success, the Uruguay National Football Team has also been noted for their exemplary conduct both on and off the field. They are considered one of the most respected teams in the world and continue to be a dominant force in South American football.

Uruguay’s National Football Team had an impressive run in the early 1920s, culminating in their first Olympic Gold Medal in 1924. Led by captain José Nasazzi and superstar striker Pedro Cea, Uruguay was able to convincingly defeat Sweden 3-0 in the final. This victory made them the first South American team to ever win an Olympic gold medal.

The first FIFA World Cup was held in Uruguay in 1930. The Uruguay National Football Team was one of the favorites to win, and they did not disappoint. They were able to reach the final by defeating Argentina 4-2 in the semi-final. In the final, they faced off against Argentina again and were able to win the game 4-2, making them the first ever FIFA World Cup champions.

This victory is seen as one of the most impressive feats in Uruguayan football history, and it cemented their status as one of the best teams in the world.

1950 FIFA World Cup and the “Maracanazo”

The 1950 FIFA World Cup was the fourth edition of the FIFA World Cup, the quadrennial international football championship for senior men’s national teams, and was held in Brazil from 24 June to 16 July 1950.

This was the only tournament not decided by a one-match final. It was also the inaugural tournament where the trophy was referred to as the Jules Rimet Cup, to mark the 25th anniversary of Jules Rimet’s presidency of FIFA.

The planned 1942 and 1946 World Cups were canceled due to World War II, but in 1950 it resumed and was hosted by Brazil, a favorite to win the cup that year.

However, Uruguay, who had won the inaugural competition in 1930, defeated the host nation, Brazil, in the deciding match of the four-team group in the final round.

The match was known as “Maracanazo”, which refers to the Maracana Stadium where the final match was being held. According to history, the Stadium was full of supporters rooting for Brazil that went in complete silence as the Referee called the end of the match. Nobody expected Brazil to lose the championship, least say against a national team from a small country such as Uruguay

The Uruguay National Football Team continued to be successful in subsequent FIFA World Cup tournaments, reaching the semi-final on two occasions (1954 and 1970).

During this grim period of time in Uruguay National Football Team, they failed to qualify for major tournaments and had several disappointing performances. As a result, there was a lot of pressure piling up on the team.

Year after year the population stopped rooting for the National Team, even though Managers and Players changed across those decades. Not only that but it was even regarded as the worst team in one of the last World Cup Tournaments in this timeframe.

With a new Manager, Oscar Tabarez, who established a very serious approach across the board, Uruguay National Football Team started rising from the ashes and became serious about reclaiming its former glory.

In the 2010 FIFA World Cup, Uruguay was placed in Group D with South Korea, Argentina, and Greece. They were able to reach the semi-final by defeating South Korea 2-1 in the round of 16 and Ghana 7-3 in the quarter-final. However, they were defeated 2-1 by the Netherlands in the semi-final.

The Uruguay National Football Team is one of the most successful teams in international play, with a rich history that spans over a century. They are currently ranked 16th in the world by FIFA.

The current roster of players is led by captain Diego Godin, an experienced defender that has been also captain of his usual teams such as Atletico Madrid and others. He anchors a stout defense along with Jose Maria Gimenez.

In midfield, they have the young talent of Federico Valverde, a usual player in any Real Madrid Match during both La Liga and UEFA Champions League and a key figure for any match the national team plays.

Luis Suarez and Edinson Cavani, both of whom are prolific goal scorers and considered two of the best football players in the world join young talents such as Darwin Nuñez to make Uruguay’s forward one of the most dangerous teams in offense

The Uruguay National Football Team has a bright future ahead of them and will be looking to add to their championship legacy in upcoming tournaments.

The Qatar 2022 FIFA World Cup is just around the corner, and the Uruguay National Football Team is gearing up for a shot at the championship. They have a very strong roster of players, anchored by captain Diego Godin and led by talented young players such as Federico Valverde.

They are currently ranked 16th in the world by FIFA and will be looking to improve on their performance in the 2018 FIFA World Cup, where they reached the quarter-final before being defeated by France.

With a strong defense and a powerful offense, the Uruguay National Football Team is certainly one of the contenders for the title in Qatar 2022.

How you can support Uruguay’s national football team in the upcoming World Cup?

As the Qatar 2022 FIFA World Cup draws near, it’s important to support your country’s national football team. The Uruguay National Football Team is one of the strongest teams in the tournament, and they will be looking to bring home the championship.

There are a few ways that you can support the Uruguayan squad as they make their run for the cup. First, make sure to follow them on social media and keep up with their latest updates. You can also show your support by wearing Uruguay gear or flags. Finally, you can root for them when they play live by attending their matches or watching them on TV.

No matter how you choose to show your support, make sure to join in and cheer on the Uruguay National Football Team as they make their run for the World Cup championship!

Overall, Uruguay’s National Football Team has a proud history and is poised for a bright future. Fans worldwide will be eagerly watching as they attempt to reclaim their place at the top of international football.

Some of the links in this article may be affiliate links, which can provide compensation to me at no cost to you if you decide to purchase a paid plan. These are products I’ve personally used and stand behind.

How to Travel to Uruguay from Canada in 2022

How to Travel to Uruguay from USA in 2022

How to Travel to Uruguay from Europe in 2022

How to Travel to Uruguay from Canada in 2022